Fail to prepare, prepare to fail, said hmm, I’m not sure but definitely someone vaguely impressive followed by, let’s face it nearly all of us at some stage during a bad powerpoint presentation that we’d all rather forget. Still, there is definitely a little nugget of wise-owl-ness in there somewhere that made me wish my planning skills were better. This dawned on me the night before we began our now annual exodus to my family’s seasonal seaside holeaway in Skerriestucket: I began bulk wrapping pressies in a rather impressive Ford-like gift wrap assembly line, and slowly realised that, not unlike the time I went on holidays with a suitcase full of tops but no bottoms, I had bought nothing for our youngest daughter and a North Kardashian West amount for the toddler.

Like not even one. Now seeing as she is also not even one, it’s unlikely to affect her too much but it has given me a boot up the bum to remind me as we are staring down the barrel of 2015, hereafter known in my household as “the Year of the Great Build”, I will need to get my multitasking mojo up and running if we are to actually finally do this thing.
In my defence, it’s been a rather busy couple of months: we gained a new member of our household in the shape of a Spanish au pair, I reluctantly peeled myself away from our chubby cherub Essie, put on way too much make-up being entirely out of practice and returned to work and there was also of course, the Christmas. However, I can now, with my new commitment to planning and organisation and with a nice pickle of irrational exuberance and utter naivety, declare that my only new year’s resolution is to have this bad boy built in 2015. I am on it. I have even, twice in the past week, invited my entire family over for Christmas dinner in it next December which by anyone’s standards, wildly optimistic but everyone needs a star to shoot for and I am GUNg-ho.

I will need every ounce of this gumption as the house is really looking very sad. Ah yes the house, it still exists, and remains on lockdown in its fragile folorn fettle, waiting for the New Year to breathe new life into it. Well lockdown until the other week. Passing by late one night, and typically the night before I returned to work, we realised that the front door had been kicked in. Armed with a childsize hammer and some other unknown tools, poor Daragh trudged over in the lashing rain but as he began whittling the door back into shape, he quickly realised that there was still someone in there. Being the brave warriors we are, we obviously called the guards and cowered outside.

Allow me if I may to go off topic for one sec and say that I think the guards are total legends. I have met them in all sort of Guardy situations, from trivial to tragic and everything in between (including one very exciting night when about twenty of them barrelled through our front door in the middle of the night to catch three baddies hiding in our back garden after a robbery up the road) and they have always been amazing. Mainly I think for their chameleon like adaptability to every crazy ass situation they no doubt find themselves in every day of their Gardai lives: Narky, scary, boggery, fake stoopid, kind, fake nice, ignorant; they have a persona for every occasion. Take this night for example, they pitched up straight away and without hesitating ran straight into the beyond black freezing house and up the death threat stairs that I have never even been up, before appearing back hero-like within sixty seconds with a rather abusive, worse for wear tinker-esque couple. As to the purpose of their visit, we still don’t know and that is fine by me to be honest.

The guards then added an unnecessary but most enjoyable flair to proceedings by switching into an unexpected role play situation (which for anyone who knows me is actually my worst nightmare but I was thankfully only observing hovering across the road) and dragged Daragh into the scene introducing him as the Sergeant.

I don’t know who was more shocked, our new visitors or my husband, Detective Inspector Coughlan, who I think quite enjoyed his 5 minute Templemore tingle of a Monday night. Excitement over, the door is now padlocked to within an inch of its life and the house now looks even more derelict than ever which I never would have thought possible. 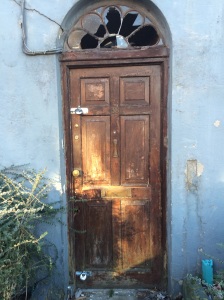 The saddest door in Dublin?

Short of actually falling down, the only way for our little project is literally up from here on in and we are champing at the bit and giddy with excitement to kick things off in 2015.
I am sure by this time next year, we will no doubt be broke and broken in equal measures but right now, we are still in the first flush of love and cant wait for the adventure to finally begin. We have finally, eventually, made an actual decision and have gotten ourselves an architect, and the plan is to sit down with him in January to brief him. 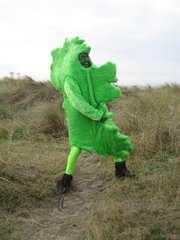 Hopefully then without too much further ado, we can go in Miley style with a giant wrecking ball (that’s Cyrus btw, not Glenroe – I have a cross generational readership. Hello mum) and start building our dream.

So that’s it from me for 2014. Hilarious that you even heard from me at all in the first place I still think: blogging was definitely not on my resolution list last year but it surprised me more than anyone how much I enjoyed tip tapping away late at night during rare moments of silence in my madhouse. So thanks to you: friends, family and strangers alike for indulging my witching hours sancerre soliloquies, and then saying nice things about them, well at least to my face. You are all lovely, or excellent liars, both of which are life skills I admire.
You should hopefully hear a lot more from me in 2015 seeing as there should, all going well, be actual progress on the house as opposed to just me warbling on about non events and spinning them as a house blog. They may even be photos. And drawings. Yep, there will be definitely be drawings. Till then, wishing you all a happy healthy New Years. I’m planning on raising a roof (as well as the girls). I hope everyone gets to build a little dream next year. Whatever, or whomever, that may be.
Claire
x

← Double Trouble
The shape of things to come →
Follow Bricking it Dublin on WordPress.com